Last week I blogged about altering my sleeping pattern in order to get more out of my day and keep up with my music goals. Here are the reasons why I decided to do this. 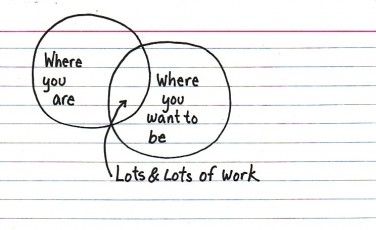 Every time I practice my accordion I always create more for myself to practice next time. I like to spend a bit of time improvising as this is such a great tool when it comes to composing. Most of my improvising tends to explore one idea such as a simple chord sequence and rhythm, and then coming up with new melodic ideas that go with this. I’ve also tried playing along to some of my favourite tunes and seeing if I can add anything new to the piece, or at least play the right notes. This combination is how I’ve been creating my parts for the 5 cover songs that we’re currently playing in the band which I joined. Each practice we seem to spend the last 15 – 30 minutes improvising to some simple chords and rhythms, but the rest of the time we work on these covers. As well as practicing these covers I also like to practice and develop the pieces which I’ve been writing for my accordion. I’m hoping to get them to a good enough level where I can play them busking in the summer. But it’s always good to have a few popular songs up your sleeve which people already know, so I’ve also started learning some solo accordion covers. Now this is already a lot of stuff to be practicing, so let’s increase the work load by changing instruments.

The piano. I’ve also noticed myself  improving on the piano and whilst I originally only practiced for 30 minutes to an hour a day, I can now easily sit in front of the piano for 2 hours straight. I’m still practising from the books that I have, but I’ve also been creating compositional ideas by playing around with different chord progressions and melodies, much the same as when I’m improvising on the accordion.

Then there are the online courses that I’ve been taking. I started out just doing one, then I increased it to four and now I’ve managed to get it down to two, which I’ll be keeping it at until probably around June. But that is not enough. I’ve got some music theory books which I’m also reading and working through, plus a tone of tutorial videos on how to use Logic Pro X, which I’ll be starting soon.

Now you can see why I’ve altered my sleep cycle!